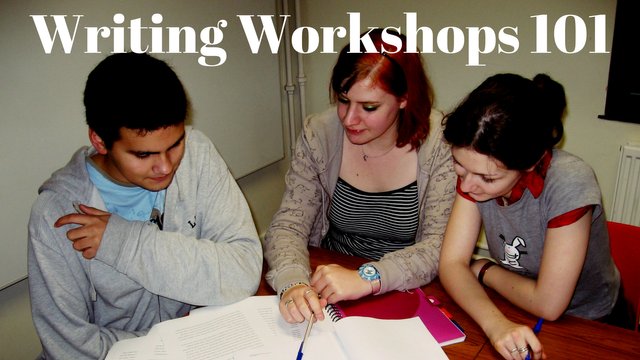 Writing is a mostly solitary occupation.

We spend hours, days and months working on stories, novels and poems in seclusion, developing our craft as we go. To begin with, as you work on the basics, it’s fine to be in this position.

At some point, most of us make the realisation that to make any significant forward progress we’re going to need feedback from writers more advanced and further along with their craft.

At this stage you’re probably going to go look for a writing group, either in real life or online. This is the best route for further development, even though, to begin with, it can be a scary prospect, especially when you first start to share your own work with a group of people you don’t know.

The same often applies when you have to begin giving feedback on the work of others.

This post is somewhat of a short primer on what to expect and what may be expected of you.

Of course, this will differ from group to group.

So I’ll be talking about the general rules of etiquette used in writing groups. Be sure to make yourself familiar with any house rules in use within any groups you join.

There’s a lot to get right before you submit your work to a group. Your grammar, punctuation and spelling should be up to scratch.

No one worries about typos or commonly misused words but if you’re still working on the basic elements of language, in-depth workshopping is not yet for you. There’s no way around this.

I’ve heard people ask before: “Just look past my poor use of English and judge the content alone.” The trouble is, grammar and punctuation affects meaning. The entire reason for workshopping is to bring work to a publishable standard. At this level, without the basic tools of writing at your disposal, it’s just not something that can be achieved.

On top of this, writers are only human and I’m not sure I know of any writer who wouldn’t start correcting technical errors in a piece the moment they’d been handed it. This level of editing and correcting is something you should be doing before you submit your work for feedback. Writing group participants sign up to help work on people’s craft, not to teach remedial English.

Two – if you’re looking for people to tell you how great a writer you are, don’t submit work.

If you’re looking a piece you’ve written and are thinking: “This is the greatest thing ever. I can’t wait till they recognise my genius,” get ready for a huge serving of disappointment.
Or, better still, don’t submit work.

Three – leave your ego at the door.

When you offer your work to be critiqued it is about the work only, it’s not about you. Good workshoppers will judge the work as they see it on the page and not take anything else into consideration.

Yes, to begin with, it can hurt to get negative feedback but that’s only because you’re allowing your ego to get involved. Feedback will mostly be about the work and rarely directly about you unless you’re making a frequent error and someone points that out.

Or, if you’ve ignored rule one and people are constantly commenting on your grammar and spelling.

After a while, it gets much easier to disconnect yourself from your work. In my first year of university studying creative writing, students were treading on eggshells around one another during workshops.

By the end of the second year, when we all knew we were about to get final marks based on our work, that all stopped and in workshops we’d say: “Rip the shit out of it and tell me what’s wrong.”

Four – assume your editors are treating your work with the best intentions.

The work – it’s all about the work. When I edit a piece I go to town and I take no consideration for how the writer will feel about it. If I started holding back for fear of upsetting the writer, I may make them feel a little better but I’d be doing a serious disservice to their work.

So you may sometimes feel that they’re poking you with a big stick. They’re not. They’re probably doing the best they know how to make your work as good as it can be.
Again, it’s about leaving your ego at the door.

So, either editing or being edited, don’t take yourself so seriously. Take the work seriously.

Five – after you’ve received feedback there’s only one comment you’re allowed to make:

No matter how substantial or how true you found the feedback to be, whether you feel ecstatic or heartbroken by the comments, the critiquer has given their time by reading, editing and annotating your work.

So no matter how you feel, say: “Thank you!”

On the other hand, you are allowed to ask questions. If there’s something you don’t understand, ask if that critiquer could amplify, clarify or expand on their comments. However, don’t use this as a chance to get salty with them because you got a hard critique.

You can also ask specific questions if they didn’t give any comments at that point. Things like:

Do you think the ending works?

Did you spot the twist/foreshadowing/intertextual reference?

Do the characters seem real to you?

Really, anything that’s of concern for your piece at that stage in your writing.

Six – once you’ve received feedback, use it.

Give it some time, think long and hard about what’s been said before you get down to making the edits.

Don’t just shift a few words around and think that will do, then re-submit a piece to other critiquers. You’ll be wasting their time if you didn’t take everything they said into consideration.

Seven – the final decisions lie with you.

You have to decide on the advice you accept and the advice you don’t. This is why it’s good to try to get feedback from a number of people. There’s a good chance at some points you’ll see critiquers disagree. Again, which way you go will be up to you.

One thing that’s almost a certainty in such groups is that you’ll be expected to give feedback on the work of others. It’s only fair – if people are going to invest their time looking at your work it should be obvious that you should repay the compliment.

But what if you’re just starting out and don’t feel confident about offering writing advice?
Say so, and let them know you’ll be offering a reader’s opinion.

Restrict your feedback to talking about what worked for you and what didn’t. Where you felt the pace build and drop and that sort of thing. Let them know if there were parts you found which didn’t flow well or that you didn’t understand. Let them know where you laughed, cried, got angry.

Readers’ opinions are very important to writers. They give us a feeling of how our work is likely to be received by the public. The more feedback we get, the better. It lets us see how different people will receive our work.

If you say you’re offering a reader’s opinion, the writer won’t be expecting a technical exegesis from you, but there’s so much insight your comments can give, to enable them to fix the weaker elements of their work and enhance those bits that they do well.

What if I disagree with the comments another editor has made?

From time to time, this is going to happen. If something they have said is clearly wrong, then you should feel free to state that directly.
For example, I recently workshopped a piece on which another editor had said: “The word just should never be used.”

With things like this, it’s fair to point out that this is wrong so that the writer will ignore the comment.

But where you disagree with the comment of another editor about something which is not so hard and fast, couch your comments in support of your opinion, not against the opinion of the other editor. For example:

Editor One: I think the dialogue here is too verbose.

Editor Two: I’d go the other way on this. I feel the dialogue here reflects the characterisation you’ve set up for the protagonist.

The final thing we should be wary of is trying to push our opinions on elements of the writing that go to the voice of the writer. Things like:

You’ve used the word nasty here, it would be better if you said horrible.

…are never okay. Or:

I don’t like that word, you should use something else.

The key question to ask yourself is if the writing works. Making changes on the basis of how you would do it, when nothing is technically wrong with the piece, is a step too far.

All of this is a learning process, but a worthy one. In learning how to critique the work of others you’ll be increasing your understanding when it comes to editing your own.

Learning to critique is as important a process as learning to edit. If you have any questions about critiquing the work of others, ask the more experienced members of your group. They’re writers after all. In my experience, there’s little more that writers like than talking about writing.

Let’s be honest – walking into a writing group and into a workshopping situation if you’ve never done so before isn’t ever going to be easy. Just be gracious, stick to the rules, employ good etiquette, show humility, and you’ll soon be reaping the rewards.